Encourage People Living with HIV to Get in Care, Stay in Care and Live Well. 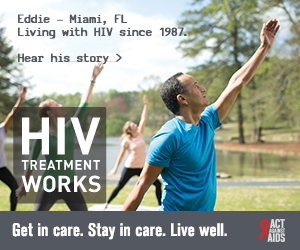 The Centers for Disease Control and Prevention (CDC) unveiled HIV Treatment Works (www.cdc.gov/HIVTreatmentWorks), a national communication campaign with the goal of encouraging people living with HIV to get in care, start taking HIV medications, remain in care, and adhere to treatment.

This integrated social marketing campaign, part of CDC’s Act Against AIDS initiative (www.cdc.gov/actagainstaids), features people from across the United States who are living with HIV talking about how sticking with treatment helps them stay healthy; protect others; do what they love; and live a longer, healthier life. This campaign also focuses on how individuals have had to overcome barriers to get in care and stay on treatment. Campaign concepts and messages reflect input from more than 100 men and women from across the country who are living with HIV.

HIV Treatment Works provides access to information and resources to help increase the proportion of people living with HIV who enter and remain in care. Ensuring that people living with HIV are successfully treated is critical to improving their overall health and reducing the risk of transmitting HIV to their partners.

HIV In 2011, an estimated 1.2 million people were living with HIV infection in the United States. Of those, an estimated 86% were diagnosed with HIV, and 40% were engaged in HIV medical care. Of patients in HIV medical care, 92% are prescribed antiretroviral therapy (ART) and 76% achieve viral suppression, meaning the level of HIV in their bodies is low enough to stay healthy and dramatically reduce the chance of transmitting HIV to others. However, only approximately 3 in 10 people living with HIV currently have the virus under control.1  This campaign supports the National HIV/AIDS Strategy and the White House’s Continuum of Care Initiative (http://www.whitehouse.gov/the-press-office/2013/07/15/executive-order-hiv-care-continuum-initiative), which seek to identify people who are living with HIV, link them to care, and ultimately increase the proportion of  people with a suppressed viral load.

Early linkage to care and retention in HIV care are central to managing HIV and promoting health among all people living with HIV. ART reduces the amount of virus in blood and body fluids. It can keep people with HIV healthy for many years, and consistent and correct use greatly reduces the chance of transmitting HIV to sex partners.